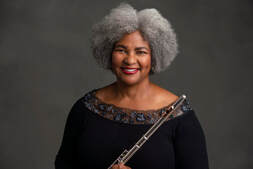 Emily Seaberry Graef, flute
​
Emily Seaberry Graef is the founder and the flutist of the Juliani Ensemble. Ms. Graef is a graduate of The University of Michigan School of Music where she won the Nelson Howenstein Award for outstanding flute performance. Emily did post graduate study at The University of Maryland and at The Mozarteum Academy in Salzburg, Austria where she studied with Helmut Zangerle. She spent two summers as the Principal Flute and soloist with The Rome Festival Orchestra in Rome, Italy and has performed as flutist with The Chicago Winds, the Chicago Symphony Orchestra's MusicNOW series and twice on the nationally acclaimed and broadcast Dame Myra Hess series.

Emily was the co-founder of The Galena Chamber Ensemble, a chamber music organization which performed in Galena, Illinois for 10 years in historic Turner Hall. She has been an artist in residence at the People's Music School and is a former faculty member of the Merit School of Music. Since 1999, Ms. Graef and the Juliani Ensemble have been performing partners with The Chicago Cultural Center, performing chamber music concerts throughout the year in historic Preston Bradley Hall. Ms. Graef maintains a teaching studio in her home for more than 20 years. 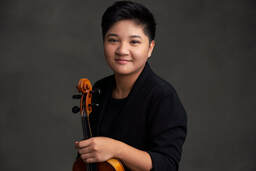 Originally from Taiwan, Yuan-ju Liu has been playing music since she was 5 years old. Throughout middle school and high school, she majored in violin in specialized music program in Taiwan. During that time, she had served as concertmaster of the orchestra and also formed a quartet that won first price in the national competition in 2013.
As an active performer, not only does she perform with lots of chamber groups and orchestras, she also participates in Jazz combos, film music ensembles and premieres of new music and compositions. Throughout her undergraduate study at Eastman, she has performed in a number of masterclasses and Eastman's honors chamber recital. In addition, she is the violinist in the Burgundy Trio, which had been invited as guest performers for the U of R Medical Centre.
Currently she is pursuing a master degree in Violin Performance under Janet Sung and I-Hao Lee at DePaul University in Chicago. She gained her bachelor degree for violin performance in Eastman School of Music, where she studied with Robin Scott, first violinist of the Ying Quartet, and Ayano Ninomiya. 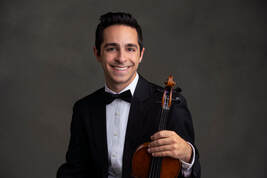 Arman Nasrinpay, violin
​
Arman Nasrinpay began playing the violin at the age of 10 through the Fairfax Symphony Orchestra Program. He has since performed at venues such as the Kennedy Center Hall and Millennium Stage, Strathmore Music Center, the Meyerhoff Symphony Hall and the Shakespeare Theatre for Performing Arts.
He has held many prestigious positions in orchestras, including assistant concertmaster of the McLean Youth Orchestra, assistant principal second violinist of the American Youth Philharmonic, Principal Second of the Londontowne Symphony Orchestra, Assistant Principal
Second of the Aspen Philharmonic and Assistant Concertmaster of Indiana University’s Concert
Orchestra, among others.
Nasrinpay has frequently performed — and to great acclaim — in the greater Washington, DC
area, and gained recognition by winning top prizes and honors in numerous competitions.
Among these are such prestigious contests as the Washington Performing Arts Society’s Feder
Competition, the United States Army Young Artists Competition, the Lions of VA Bland Music
Competition, the Asian American International Competition and the Gretchen Hood String
Competition, among others.
Along with competitions, Nasrinpay has performed in master classes given by Aaron Rosand,
Zino Bogachek, Karina Canellakis, Dmitri Berlinsky, Victor Danchenko, Itzhak Rashkovsky and
Ani Schnarch.
During the summer, Nasrinpay has participated in various music programs. These have
included the Indiana University Summer String Academy, the Summit Music Festival, Kent
Blossom Music Festival, Chautauqua Music Festival, Aspen Music Festival and School, as well
as the Bowdoin International Music Festival where he received instruction from Almita and
Roland Vamos, Victor Danchenko, Itzhak Rashkovsky, David Halen and Cyrus Forough. Most
recently, he studied at the Indiana University Jacobs School of Music as a Premiere Young
Artist under pedagogue Simin Ganatra of the Pacifica Quartet. 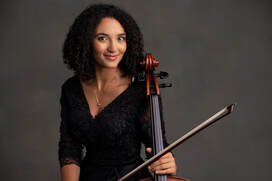 A native of Chicago, Anita Graef began her cello studies at age four, going on to make her concerto debut at age twelve. She went on to obtain a Bachelor’s Degree from the University of Michigan’s School of Music, Theatre, and Dance, where she studied with professor Anthony Elliott. Following this, she received a Master’s Degree at the University of Cincinnati College-Conservatory of Music, under the tutelage of Ilya Finkelshteyn. She frequently appears with the Cincinnati Symphony Orchestra as a CCM-CSO Diversity Fellow.
In the past, she has had occasion to work with cellists such as Stephen Geber, Johannes Moser, Felix Wang, Yehuda Hanani, and has studied with several members of the Chicago Symphony Orchestra, including Jonathan Pegis, Richard Hirschl, and Brant Taylor. She has performed in several orchestras under the baton of maestros such as Leonard Slatkin, Miguel Harth-Bedoya, JoAnn Falletta, Louis Langree, James Conlon and Keith Lockhart.
She has participated in the 79th season of the Brevard Music Festival as principal cellist, the Catskills Chamber Music Festival, as well as Credo Chamber Music Festival at Oberlin Conservatory. She is a member of the Juliani Ensemble, where she has collaborated with members of both the Chicago Symphony and Lyric Opera Orchestra, among others. She was recently awarded the Silver Prize with Distinction at the Young Classical Virtuosos of Tomorrow international competition.  Upcoming appearances include performances with the New World Symphony, the Tallgrass Music Festival, as well a debut performance on the Dame Myra Hess Memorial Concert series, broadcast nationally on 98.7 WFMT. 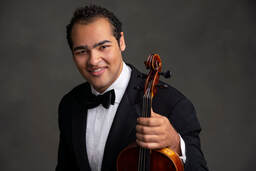 As a student of Professor George Taylor at the famed Eastman School of Music, Julian Graef received a Bachelor's of Music and a Master's of MusicHaving studied with Chicago Symphony Orchestra Assistant Principal Violist, Li-Kuo Chang, Julian has established himself as one of the up and coming young violists. After playing viola for only months, Julian was accepted into the North American Viola Institute at Orford Academy, Canada, prestigious summer program. Mr. Graef has also attended Credo Music Festival at Oberlin Conservatory and Brevard Summer Music Festival in Brevard, North Carolina. Previously, Julian performed in the Chicago Symphony Orchestra's Youth in Music Winter Festival, Riccardo Muti director.  In addition, Mr. Graef has also worked with renowned artists such as Leonard Slatkin, The Ying Quartet,Keith Lockhart, and Jeff Beals, and has performed with the Missouri Orchestra. Outside of music, Julian is an accomplished equestrian, ceramicist, weight lifter, fluent in French and studying German.